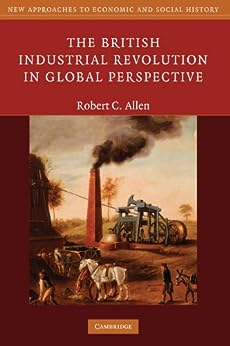 Robert C. Allen is Professor of Economic History at Oxford University and a fellow of Nuffield College. His books include Enclosure and the Yeoman: The Agricultural Development of the South Midlands, 1450–1850 (1992), and Farm to Factory: A Re-interpretation of the Soviet Industrial Revolution (2003), both of which won the Ranki Prize of the Economic History Association. --Ce texte fait référence à l'édition digital.

'Robert Allen has for decades been one of the broadest-ranging and most imaginative scholars in economic history. In this highly original and superbly-researched book, he has set new standards for the study of one of the most critical episodes of human history, the British Industrial Revolution. A must-read for scholars ranging from eighteenth-century history to the economics of modern growth.' Joel Mokyr, author of The Gifts of Athena and The Enlightened Economy

'This important book should be required reading for anyone seeking to understand the origins of the industrial revolution. It puts technological change centre stage and places success in invention firmly in the context of economic incentives and business realities that made 18th-century Britain different. This is a stellar demonstration of how subtle economic analysis informed by detailed historical knowledge can provide a persuasive new interpretation of a defining moment in world economic history.' Nicholas Crafts, Professor of Economic History, University of Warwick

'Bob Allen has written, in his usual transparent style, a brilliant book on two of the main questions of economics (or economic history): why did the Industrial Revolution happen in Great Britain, and why did it cause a fundamental break in long term economic development. He argues convincingly that relative prices - high nominal and real wages, and low energy costs - were fundamental in inducing British entrepreneurs and inventors to search for technological solutions that would be labour saving and energy (and capital) using, and that the same relative prices explain why this search process was successful on the British Isles, and much less so on the European Continent. He also demonstrates that, once this process of creative destruction was set in motion, the efficiency of the technologies increased so sharply, that they became highly competitive in different environments - and therefore, after 1820, began to revolutionize the world economy. One of the main strengths of the book is the intimate knowledge the author has acquired of both the technological processes involved, and the economics of industrialization - it is based on a perfect marriage between technological insights and economic analysis.' Jan Luiten van Zanden, author of The Long Road to the Industrial Revolution

'Robert Allen's analysis will delight many economists, for he deals in measurable factors such as wages and prices … This is a beautifully written book, the language as clear as a brook and with the same tumbling energy.' The Economist

'… the smartest thing I have read in at least a year.' Professor J. Bradford DeLong, Department of Economics, University of California, Berkeley

'Robert C. Allen's The British Industrial Revolution in Global Perspective shows that it is still possible to say something new and important on this most crowded of topics, and to do so with lucidity.' Linda Colley, The Times Literary Supplement

'… stunningly good study of the Industrial Revolution … The book is well written and is essential reading for anyone wanting to understand the origins of industrial change in the eighteenth century.' Historical Association

'This is the book you should use to teach the Industrial Revolution.' Journal of Economic History

'The relationship between shari'a and politics is obviously complex. Feldman's book provides an excellent starting point for a subject notoriously difficult and little understood. Feldman gives us a good place to start from, from, for it runs counter to most Western thinking on the subject.' The European Legacy --Ce texte fait référence à l'édition kindle_edition.

Francisca
5,0 sur 5 étoiles What happened to our cheap energy!
Commenté en France le 19 février 2012
Achat vérifié
This book I bought for my husband! His own words.... "Very well written and interesting book. As a non economist I found some parts a bit heavy and the book could be greatly improved by higher quality tables".
En lire plus
Utile
Signaler un abus
Traduire les commentaires en Français
Afficher tous les commentaires

Chris Purnell
4,0 sur 5 étoiles A very good summary of the UK's industrial revolution
Commenté au Royaume-Uni le 6 décembre 2017
Achat vérifié
This is far better than a simple textbook. It offers very interesting insights into a well-trodden path of industrial development in the UK. The connexion between wages and technological innovation is reiterated but is very important. Also the size of the urban population and technology. The energy market is well understood and placed in context.

I bought this as a Kindle and that was an error of judgement. Graphs and data presentation is so poor as to be unusable. As these are central to the enjoyment of the book I strongly advise against buying Allen's book on Kindle.
En lire plus
Une personne a trouvé cela utile
Signaler un abus
Traduire les commentaires en Français