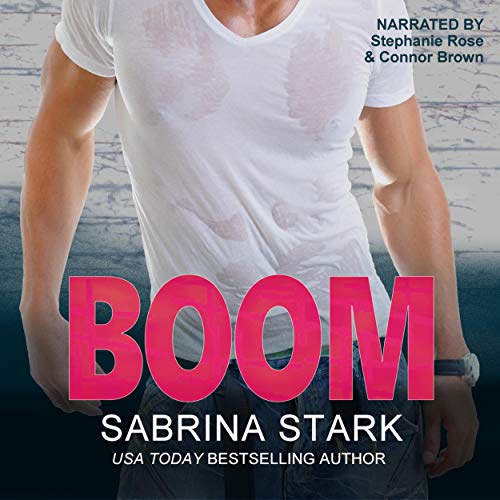 One crumbling house. One exploded truck. And two people who think they can't stand each other.

Arden Weathers. She's a girl on a mission, and that mission most certainly doesn't involve Brody Blastoviak, the hometown hottie who made her college prospects go boom six years ago.

Brody Blastoviak. He knows better than to stick his you-know-what into crazy. So why is he losing his cookies over Arden Weathers, the uptight chemistry partner who "accidentally" torched his truck back in high school?

Now, older and wiser, these former classmates are supposedly on the same team - working to restore a crumbling beach house that both of them want to claim as their own. Too bad for Arden, Brody holds not just the deed, but all of the cards and clout, too.

She's a broke college graduate, while Brody is not only hotter than ever but obnoxiously rich and famous, thanks to Blast Tools, a rags-to-riches brotherly venture. It's all so stupidly unfair, especially when Arden makes an appalling discovery. Turns out, she's not nearly as immune to her enemy's charms as she thought.

This enemies-to-lovers romance is a fun, full-length billionaire romantic comedy with a guaranteed happily-ever-after!

all the books are mine!
5,0 sur 5 étoiles Loved this book
Commenté au Royaume-Uni le 28 juin 2020
Achat vérifié
Yet again Sabrina Stark can be relied upon to deliver a great contemporary romance.
Arden and Brody have a long history of misunderstandings, antagonistic actions and accidents which lead to long term consequences.
The pair haven't seen each other for years, but the minute they do, all the anger comes flooding back for both of them.
Forced to live and work together, the pair begin to thaw towards the other.
I loved this couple, they both grew over the course of the book. I loved the fact that Arden stood up for herself even when faced with hostile people and situations.
Really enjoyable start to a new series from the excellent Ms Stark.
En lire plus
3 personnes ont trouvé cela utile
Signaler un abus
Traduire les commentaires en Français

Margaret
5,0 sur 5 étoiles Hate / Love and tears
Commenté au Royaume-Uni le 17 août 2021
Achat vérifié
I read book one last, no reason other than I found that I came across book two first, they are all stand alone books, all brilliant and none them cut short. Three book about three different individuals, all loving brothers who always put family first. This be is about Brody and Arden who have a history going back to high school, things are not always as they seem apparently, both have kept secrets. Loved all three books. Brilliant Author.
En lire plus
2 personnes ont trouvé cela utile
Signaler un abus
Traduire les commentaires en Français

Mick Newing
5,0 sur 5 étoiles Good fun reading
Commenté au Royaume-Uni le 8 juillet 2020
Achat vérifié
This is the first book I have read by Sabrina and I really enjoyed the story, it was good fun reading which I found hard to put down. The story line detail helped me envisage what the property looked like from start to finish, right down to the new kitchen cupboards. Well worth reading, looking forward to the next book - Debbie Newing
En lire plus
3 personnes ont trouvé cela utile
Signaler un abus
Traduire les commentaires en Français

Julie
5,0 sur 5 étoiles refused to put this down!
Commenté au Royaume-Uni le 13 janvier 2022
Achat vérifié
This is the first of Sabrina sharks books I have read and definitely will not be the last! Absolutely loved this story, going on to the 2nd book haven’t a clue what it’s about I just hope these two will be in it, if not I’m going to miss them!
En lire plus
Signaler un abus
Traduire les commentaires en Français

I. Hamilton
5,0 sur 5 étoiles Fantastic read
Commenté au Royaume-Uni le 28 juillet 2020
Achat vérifié
I love an enemies to lovers romance, and this was a perfect example of that genre. I've never read anything by this author before, but I'm just about to pre-order the next in the series - that's how much I enjoyed her story.
En lire plus
Une personne a trouvé cela utile
Signaler un abus
Traduire les commentaires en Français
Afficher tous les commentaires