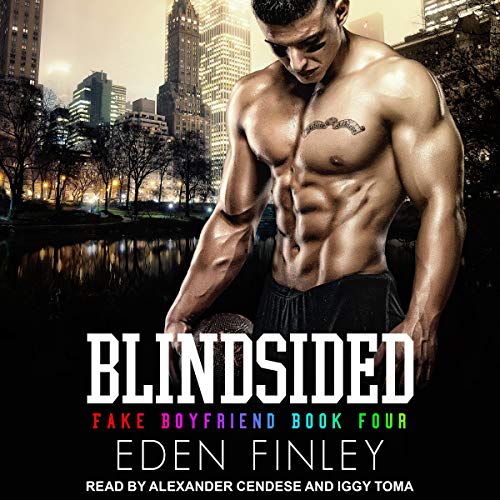 When Talon left to play pro ball six years ago, the hole in my chest confused me. I focused my heartache into making my own NFL dreams come true, and by the time I was drafted, the longing I had for my best friend was buried deep. Now, he wants everything to be like it was in college, but we can't have threesomes and be reckless like we once were. The media storm would be enough to break both our careers. That's not my biggest concern, though. The torch I had for him burns brighter after so long apart, and there's nothing I can do about it. Marcus Talon is straight. I need to stay away from him.

Years ago, Miller and I made a pact that we'd win a Super Bowl together. When I'm offered a position on his team in Chicago, I don't hesitate. I move across the country to chase a dream that's a decade old. Only, now that I'm here, he's avoiding me every chance he gets. If he was anyone else, I'd cut my losses. But this is Shane Miller - the guy who makes everything better just by existing in my universe. The guy I'd do anything for. The guy who's more to me than a brother, a friend, or even a teammate. I'm not going to let him get away.

book.lover.so_fantastic
4,0 sur 5 étoiles Love a great friends to lovers trope !! Got blindsided
Commenté en France 🇫🇷 le 22 avril 2022
Achat vérifié
We already had a glimpse of Marcus and Shane in Trick Play but enough for what was coming. They know each other since college but after Marcus was drafted, they just grew apart from each other as Shane thought he may have a crush on Marcus and didn’t want to really see him. However, Marcus decided to sign with Shane’s team and they end up seeing each other daily, after walking on Noah and Matt doing it, Marcus doesn’t know where he stands and what are his feelings. Shane injury’s and time away from the team will allow Marcus to think of it and to realise that he has something for Shane. When two friends find love in each other, with a little awakening, it’s just beautiful…
En lire plus
Utile
Signaler un abus
Traduire les commentaires en Français

Loïc RICHARD
4,0 sur 5 étoiles A story that let me blindsided by his quality
Commenté en France 🇫🇷 le 19 mars 2019
Blindsided is the fourth volume of the Fake Boyfriend series. A series that I love. I had a huge crush on the previous book, but I must admit that this new title of the series is for me a bit below. It still remains a very good reading that I can only advise all fans of romance in the sports environment.

Very often I regret that the heroes who discover themselves gay or bisexual advance too quickly in the relationship and that they jump in the gay sex with too much enthusiasm and natural. Here, Talon and Miller take their time. They do not rush and the passage between friend and boyfriend stage is done naturally. They take the time to think, to question themselves and they have fears and doubts. This bias of the author is to be welcomed, because it brings a lot of realism to the story. By cons on the scenes of sex, it goes a little too gently and sometimes gives the impression that Talon is a virgin. It did not bother my reading and it even made me smile, but I think it's important to emphasize this for people who want to find out from the beginning scenes of sex worthy of the biggest gay porn studios.

Another positive point of this book, I liked that the relationship between the two men is not the only point of focus of the story. Miller's injury, his reduction, and the challenges of his future career are points that the author has put forward and has a great importance in the story. First, it's during Miller's reeducation during the pause of the season that the two men will really change their story. Talon will be present every day to help his friend and lover, and they will gradually bring their relationship out of the shadows to live in broad daylight. Secondly, Miller's injury and its possible consequences will put a big blow to the morale of the man who will start to depress and doubt his future especially when the two men have to decide whether or not they want to make public their new status as a bisexual player.

I will be able to list many other qualities to this new Eden Finley novel, but it will ruin the pleasure of reading it. Just know that I advise you warmly, because once again the author offers us a title built around a romance with the right dose of spice. Above all, Eden Finley is an author whose quality of the pen evolves in good volume tome, which allows us to predict many other titles of quality.
En lire plus
Utile
Signaler un abus
Traduire les commentaires en Français

Elle Kaye
4,0 sur 5 étoiles Cute
Commenté au Royaume-Uni 🇬🇧 le 23 octobre 2022
Achat vérifié
This has been an interesting book!
I started reading this because of Eden Finley’s Football Royalty, Franklin University series, which featured their children!! Which is one of the best series I have ever read! And they seemed like such amazing and hilarious parents that I wanted to see how it all started.
En lire plus
Signaler un abus
Traduire les commentaires en Français

Amazon Customer
5,0 sur 5 étoiles Just
Commenté au Royaume-Uni 🇬🇧 le 2 juillet 2022
Achat vérifié
So I take back Deke being my favourite of the series! This book! Omgg! The emotions and crap Miller and Talon have to go through just to love each other is such a true representation it's makes me angry but the fact they pushed for each other is just!
En lire plus
Signaler un abus
Traduire les commentaires en Français

Mrs C
4,0 sur 5 étoiles Great read...
Commenté au Royaume-Uni 🇬🇧 le 22 mars 2019
Achat vérifié
Enjoyed Miller and Talon's story. Friends to lovers is one of my favourite tropes. Especially when one of those friends is more pansexual. It kind of makes their relationship just that little bit more special. There are lots of ups and downs throughout their story. Loved Talon's brother, Trey. I really hope he has a story.