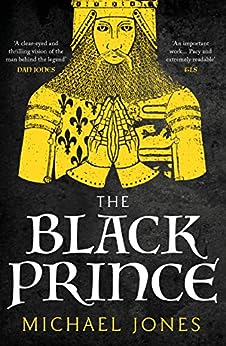 'The Black Prince is one of the great romantic heroes of the Hundred Years War and in Michael Jones he has a worthy biographer. This is a clear-eyed and thrilling vision of the man behind the legend and a splendid introduction to one of the most fascinating periods in medieval history' Dan Jones

'Offers a thoughtful, rounded picture of a man who led not solely by virtue of birth, but through personality and achievement, too' The Tablet

'A fascinating biography' BBC History Magazine Book of the Year (2017)

'Compellingly readable...Jones has given us a superb new study of the Black Prince' --History

'Jones has done an excellent job ... It is not easy to make somebody so far back in history really come alive, but this book has pulled it off extremely well. It is supplemented with several pages of maps, battle plans and a detailed timeline' The Bookbag

'Michael Jones superbly brings to life the campaigns and battles which made the Black Prince's name ... The hero and the villain were one man and Jones does justice to this complexity' The Times

'Splendid ... Jones convincingly argues that Edward should not be too readily condemned [...] with great skill and lightly worn erudition ... Will enthral a wide audience' Spectator

'Sure to enlighten and entertain thanks to the author's use of new archival research and his pacy, atmospheric writing style' --History Revealed

'Fascinating ... restores one of our great heroes to his rightful position' Daily Mail

'Michael Jones researches as a historian but writes as a novelist. His characters are fresh and realistic ... Even readers who know nothing of this period of history will be captured by this warm and lively portrait of the Black Prince' Philippa Gregory

'A gripping read; it has that 'just one more chapter' quality that keeps you going late into the night ... A compelling and humane portrait of a medieval warrior, bringing the Black Prince and his world triumphantly to life' David Santiuste

Michael Jones is a writer, battlefield tour guide and media presenter. He is the co-author, with Philippa Gregory and David Baldwin, of The Women of the Cousins' War; and, with Philippa Langley, of The King's Grave: The Search for Richard III.

Stephen Cooper
5,0 sur 5 étoiles NOT SO BLACK
Commenté au Royaume-Uni le 13 novembre 2018
Achat vérifié
Michael Jones was a medievalist who turned modernist, writing several excellent books about the fighting on the Eastern Front during the Second World War; but he has now returned to the Middle Ages. We should be glad, because this book about the Black Prince (1330-1376) is a first class piece of research, as well being highly readable. The narrative sweeps you along, while there is also adequate space for analysis and reflection.
The book goes way beyond Froissart (who once formed the basis of all accounts of the so-called Hundred Years War), not least because it makes extensive use of French sources, archival and others. It is particularly remarkable for its demolition of the Froissart-based myth that the Prince was responsible for slaughtering thousands of innocent civilians at Limoges in 1370. On the other hand, Jones will have nothing to do with Ian Mortimer’s eccentric theory that King Edward II was not murdered in Berkeley Castle in 1327 (whether by means of a poker placed in the fundament or by other foul means).
There is much in this book apart from the famous battles and campaigns (Crécy, Poitiers, Nájera). So, we have the best explanation of why the nickname of the Prince’s wife (the ‘Fair Maid of Kent’) was to say the least ironic; and we have a moving evocation of the long but luxurious years Queen Isabella spent at Castle Rising. But the heart of the book has to be Jones’s treatment of the relationship between chivalry and warfare. Here, he shows how the two did indeed go hand in hand, because of the importance of leadership and morale, as well as training and discipline - the old Roman virtues to extolled by Vegetius, whose book was often read by the medieval military aristocracy. To my mind, Jones’s is the best description of the chivalric (not to say chivalrous) way of life that we have - and I would rank him above Richard Barber or the late Maurice Keen. I also prefer his exciting account of the Black Prince’s Raids of 1355 and 1356 to the somewhat clinical but classic account of H.J.Hewitt.
The description of the Prince’s difference of opinion with his father Edward III about the wisdom of intervening in Spain in 1367 was new, to me; and it is important. Traditionally, the Prince is described as an outstanding general and warrior, but a poor statesman; but it turns out that he did not want to intervene in Castile - it was his father who did, and was therefore ultimately responsible for the disaster which ensued. This changes everything.
Much as I liked the book, I was left with one ‘Big Question’, though it is not one which I would expect the author to have tackled. Why is it that one never hears a good word nowadays about the building of the British Empire in the 19th century; but we are all still lost in admiration for the courage shown by the Black Prince and by Henry V, in their vain attempts to devastate and conquer France in the Middle Ages? Is it because we don’t really care what the French think? Contrast the hostile views of the Empire, emanating from India, Africa, and elsewhere.
En lire plus
52 personnes ont trouvé cela utile
Signaler un abus
Traduire les commentaires en Français

Sarah
5,0 sur 5 étoiles So easy to read but so informative
Commenté au Royaume-Uni le 6 octobre 2017
Achat vérifié
This book was so interesting. I'd heard of the Black Prince that he was the son of Edward iii who never got to the throne, liked to beat the French and was buried in Canterbury Cathedral but that was about it. This book takes you thorough the stages of his life, is beautifully written and engaging. The battles he undertook from crecy at 16 to najerra when he still did his duty to his father even though you could tell he didn't really believe in the cause were brought to life He seemed principled and fair in the context of the time he lived in, loved his wife and even when left by his father in the lurch a few times was always loyal. His friends all seemed to love him and he them. Michael Jones really bought this man to life and if only he'd lived longer I don't think his son Richard ii would have been so indulged, behaved how he did and eventually overthrown with the aftermath of that leading to civil war. Michael Jones I loved this I'm now off to read your book on Agincourt.
En lire plus
30 personnes ont trouvé cela utile
Signaler un abus
Traduire les commentaires en Français

Sophie
5,0 sur 5 étoiles If you like Richard III....
Commenté au Royaume-Uni le 29 mai 2018
Achat vérifié
With the rediscovered interest in Richard III of late, the story of one of his most likeliest role models has possibly become somewhat neglected. Michael’s biography has cast new light into the darkness around the Black Prince so the greatness of his story and era can be relived again.

A well researched and moving account of a man of dedication, bravery, triumph and tragedy. Another medieval figure clouded by contemporaries, Michael has done sterling work to analyse the man’s known character and facts in order to rule out the myths.
A fitting portrait for one of of England’s true greats. A must read for any medieval fan.
En lire plus
17 personnes ont trouvé cela utile
Signaler un abus
Traduire les commentaires en Français

Amazon Customer
5,0 sur 5 étoiles Absorbing and gripping story
Commenté au Royaume-Uni le 7 octobre 2020
Achat vérifié
Like many I had heard of the Black Prince, Crecy and Poitiers but frankly knew little about them as I had next to no English history taught at school, it generally was ancient anywhere else. Reading this made me realise what a loss that was and if history was taught in schools like this shows it can be what a difference it would make to our knowledge of the national story, especially in those far gone centuries before realistic portraiture and when much of what we take for granted in life now did not exist. In showing Edward of Woodstock, Prince of Wales and Aquitaine latterly known as the Black Prince in the light of his humanity, the one thing that never changes, the writer has shone a light on a man who in the context of his time and place still shines brightly and causes us to realise what a loss his premature death was.

This book is very well researched and it is amazing how much there is to know out there after all these centuries. It is written in a pacey readable style, a perfect fusion of academic history and a novel with the prose in no way taking away from the facts. The outline of the story is excellently laid out by other reviewers so all I will say is that despite still now knowing what he looked like it was easy to make a connection to this man and after nearly 700 years still feel the awful tragedy of his slow decline from some probably cancerous disease, which I found deeply affecting.

History has so often turned on a sixpence with the precariousness of life and it is hard not to wonder how different English history could have been and how much of that treacherous civil war known as the war of the roses may have been avoided if he had kept is health and gained the throne; from everything we are shown of him as Prince of Wales it seems England lost out on someone who for all his faults would have made an excellent King and who truly tried to encapsulate within himself the ideals of chivalry, perhaps to the point of trusting naivety at times, but without ever it seems, even despite his long illness becoming jaded or denouncing what he saw as the way for a true knight to live. He deserves to be much more remembered and this is a perfect book to help that along, I am very glad I read it.
En lire plus
Une personne a trouvé cela utile
Signaler un abus
Traduire les commentaires en Français
Afficher tous les commentaires
Retour en haut
Pour mieux nous connaître
Gagnez de l'argent
Moyens de paiement Amazon
Besoin d'aide ?
© 1996-2021, Amazon.com, Inc. ou ses filiales.