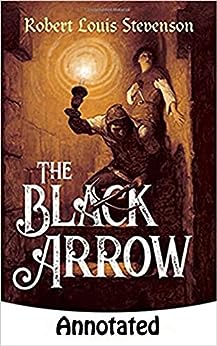 Édition en Anglais de Robert Louis Stevenson (Auteur) Format : Format Kindle
Afficher tous les formats et éditions
Sorry, there was a problem loading this page. Try again.
A Tale of Two Roses is the 1888 historical adventure and romance novel written by Scottish novelist and travel writer Robert Louis Stevenson. Set in fifteenth century England during the Wars of the Roses, the story revolves around Richard (Dick) Shelton as he becomes knighted, rescues his beloved Joanna Sedley, and finds justice for the slaughter of his father, Harry Shelton. An outlaw named Ellis Duckworth equipped with a black arrow as his trademark weapon convinces Dick that his own personal guardian, Sir Daniel Brackley, has been disloyal. As a result, Dick helps a fellowship of outlaws called The Black Arrow to defeat Brackley and win back his lady. The Black Arrow originally appeared as a serial in 1883, subtitled “A Tale of Tunstall Forest” as part of the Young Folks; A Boys’ and Girls’ Paper of Instructive and Entertaining Literature. The novel has been adapted to the big and small screen several times, most famously in the 1948 film starring Louis Hayward, and the 1985 film starring Oliver Reed and Benedict Taylor.

Narrated in the third-person limited perspective, the story begins in the area of “Old King George” in England during the fifteenth century. The Wars of the Roses are in full swing. In order to recruit soldiers for the Battle of Risingham, the Tunstall Moat House doorbell is sounded. The Moat House lord, Sir Daniel Brackley, is absent yet needs to fortify the area when a “fellowship” of outlaws called The Black Arrow begins an attack. The Black Arrow aims its strike upon the “four black hearts,” which includes Daniel and his three cohorts: Nicholas Appleyard, Bennet Hatch, and Sir Oliver Oates. After the attack, Daniel’s ward, Richard (Dick) Shelton, becomes suspicious about the death of his father, Sir Harry Shelton.

Dick is sent to Kettley, where Daniel, his guardian, resides. Upon returning to the Moat House as ordered, Dick falls in love with a woman named Joanna Sedley, who is disguised as a boy named John Matcham. Daniel has kidnapped Joanna as a means of becoming her guardian, and plans to control her fate by marrying her to Dick. As Dick and Joanna traverse Tunstall Forest, they happen upon the Black Arrow campsite, led by outlaw captain Ellis Duckworth, in Grimstone Manor. When Duckworth claims Daniel killed Dick’s father, Joanna tries to convince Dick to betray the conniving Daniel in support of the fellowship. The following day, Dick and Joanna encounter Daniel in the forest, disguised as a leper, as he returns to the Moat House in defeat following the Risingham skirmish. Dick and Joanna follow Daniel to the Moat House, where Dick ascertains that Daniel, the knight who raised him, murdered his father. Dick gets into a tussle, escapes with injury and is rescued by The Black Arrow outlaws. Joanna remains captured, now to be wedded to Lord Shoreby.

The second half of the novel details how Dick rescues Joanna from Daniel with the help of The Black Arrow, as well as the Yorkist army led by future King Richard III of England, Richard Crookback. Primarily set in Shoreby, where the Lancastrian army is posted, Dick and the fellowship steal a barge called The Good Hope and attempt to rescue Joanna by sea. The attempt fails, resulting in Daniel relocating Joanna to his main residence in Shoreby. Dick disguises himself as a Franciscan Friar and visits Joanna. Lord Shoreby is eventually killed by the fellowship, freeing Joanna from unwanted marriage to him. In order to escape Captain Arblaster, owner of the boat they stole, Dick recites the tale of Ali Baba and the Forty Thieves.
En lire plus
Previous page
Next page