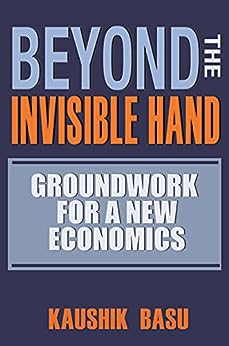 Beyond the Invisible Hand: Groundwork for a New Economics (English Edition) Format Kindle

One of the central tenets of mainstream economics is Adam Smith's proposition that, given certain conditions, self-interested behavior by individuals leads them to the social good, almost as if orchestrated by an invisible hand. This deep insight has, over the past two centuries, been taken out of context, contorted, and used as the cornerstone of free-market orthodoxy. In Beyond the Invisible Hand, Kaushik Basu argues that mainstream economics and its conservative popularizers have misrepresented Smith's insight and hampered our understanding of how economies function, why some economies fail and some succeed, and what the nature and role of state intervention might be. Comparing this view of the invisible hand with the vision described by Kafka--in which individuals pursuing their atomistic interests, devoid of moral compunction, end up creating a world that is mean and miserable--Basu argues for collective action and the need to shift our focus from the efficient society to one that is also fair.


Using analytic tools from mainstream economics, the book challenges some of the precepts and propositions of mainstream economics. It maintains that, by ignoring the role of culture and custom, traditional economics promotes the view that the current system is the only viable one, thereby serving the interests of those who do well by this system. Beyond the Invisible Hand challenges readers to fundamentally rethink the assumptions underlying modern economic thought and proves that a more equitable society is both possible and sustainable, and hence worth striving for.

Kaushik Basu is professor of economics and the C. Marks Professor of International Studies at Cornell University. He is currently chief economic advisor to the Ministry of Finance of the Government of India. His books include Prelude to Political Economy: A Study of the Political and Social Foundations of Economics and Of People, of Places: Sketches from an Economist's Notebook. --Ce texte fait référence à l'édition paperback.

Nicket
5,0 sur 5 étoiles Finally a proper critique of Economics
Commenté au Royaume-Uni le 12 juin 2016
Achat vérifié
It is rare to find a informed critique of Economics. Most books in the market are written either by people who don't understand Economics or ones that do written defensively to justify the Economics as a discipline. Thus, it was refreshing to read a book written by someone who has a grasp of the intricacies of Economic theory and is able to guide the reader through the main results before critiquing them. The criticism are profound. They shake the foundation of Economics. Yet, the books is constructive and skilfully shows a way forward. The author also regales the reader with tidbits from a range of discipline. At least, I found the book extremely entertaining and thought provoking. I don't think I am going too far in saying that the book has changed my life. I constantly find myslef quoting from the book or using the framework of the book to understand and evaluate issues. The only caveat is that the book is not written in the breezy style that is all the vogue nowadays. This is an old fashioned book that needs to be read carefully and attentively.
En lire plus
Signaler un abus
Traduire les commentaires en Français

Herbert Gintis
4,0 sur 5 étoiles Thoughtful and penetrating synthesis of humanism and economic theory
Commenté aux États-Unis le 14 février 2011
Achat vérifié
As Basu says in the final chapter of this thoughtful and penetrating volume, Beyond the Invisible Hand "tries to lay the groundwork for a manifesto, but cannot pass for one." Basu stands clearly and firmly in two traditions. The first is progressive humanism, for which the goal of social policy is to create conditions that promote the well-being and dignity of all morally worthy citizens of all countries. I am sure some will violently disagree with this goal, for instance asserting that the goal of social policy is protecting property and ensuring contracts, but I consider Basu's dream no more controversial than the goal of eliminating infectious diseases. The second tradition is that of standard economic theory, in the tradition of Adam Smith's Wealth of Nations, and as taught and practiced in virtually every institution of higher education around the world.

Small minds that cherish progressive humanism respond to economic theory (called "the dismal science" because the realities it models render humanist ideals difficult to attain) by rejecting the theory without serious critique. Small minds that cherish modern economics respond to progressive humanism (called "bleeding heart liberalism") with contempt rarely associated with serious critique. The virtue of Basu is that he is a very large mind. This book is his attempt to adjudicate humanism and modern economic theory. Why bother? Because, says Basu, economic theory has truths that are essential to recognize if we are to build decent societies, but economic theory alone cannot formulate the conditions for the good life.

There are three points in Basu's argument. The first is that economic theory models only one, albeit very important, dimension of economic life: buying and selling on markets. "In reality," Basu notes, "human beings choose not just from budget sets but also from the many other things that they can do." (25) They also barter, perform charitable acts, help family and friends, volunteer for social service, form collusive alliances (crony capitalism), spread rumors, conceal transactions, misinform consumers, offer bribes, and kill or otherwise neutralize enemies. Basu stresses that such actions are simply disjoint from market interactions, but actually facilitate or undermine the role of markets in promoting social and individual welfare. This quote is just so accurate that it deserves special mention: "Successful societies rely on individual honesty and integrity, appropriate codes of behavior, the ability to communicate, and the possession economy-friendly social norms much more than economists have been willing to concede." (43) It follows from this that we require an economic theory that jointly models market competition and social norms (see my book, The Bounds of Reason, Princeton 2009).

Basu's second point is that laws are focal points that coordinate human behavior, and they are nothing more than that. This is a very deep point, and seems counter-intuitive. For instance, suppose a law is passed limited the speed on a certain road to 65 mph. Then a motorist will obey the law because a police officer might otherwise issue him a costly citation. But why will the police officer do this? He does so because, in turn, he will be punished by his captain if he does not issue speeding tickets. But why with the captain punish him? He does so because... and so on down the line. Basu's point is that if we remove the law, no single individual has an incentive to change his behavior, given that the others maintain their behavior. The law creates what game theorists call a Nash equilibrium, and is a focal point in the sense of Thomas Schelling.

The central implications of law as focal point are twofold. The first is obvious: if a law does not create a Nash equilibrium, then it will not be followed. In other words, laws must always include the appropriate incentives for the law to be effective. This is of course well known but widely violated, especially by corrupt and oppressive governments. The second implication is that "if a law...can cripple an economy...then the same can happen even in the absence of such a law." (69) In other words, pathological social practices can just as much be responsible for dysfunctional economies as perverse laws and official bureaucracy.

This is a brilliant argument, but Basu's formulation leaves out precisely the moral content of laws. Horace famously noted that laws are futile unless they conform to the moral precepts of the citizenry. We might also add that laws themselves can create a moral force where there was none, individuals conforming to the law not only because it is in their material interest to do so, but also because they consider the law as expression a moral truth that they are willing to embrace. I do not think that this emendation of Basu's principle undermines his second point, but it does undermine the first. If laws reinforce our personal morality, they need not be all Nash equilibria of the game, because we are willing to sacrifice to conform to the law. Of course, once we admit social preferences, such laws become Nash equilibria in larger games in which preferences and the rules of the game interact. Such is life.

There is a second major problem with Basu's argument--one with which must surely agree. If we withdraw the law, no single agent will change if all the others maintain their previous behavior. However, expectations might very well change. If the 55 mph speed limit law were recinded, the motorist might believe that the policeman has no longer any reason to give him a ticket, because he knows that the policeman will believe that his superior will not repremand him for not giving speeding tickets. How does the policeman know this? He uses the same reasoning as the motorist. In short, unless we believe all agents have strong beliefs that expectations will not change, when the law is rescinded, behavior will undergo a quick and perhaps radical transformation.

Of course, the above reasoning is really a critique of the whole notion that social norms merely "pick out" Nash equilibria. This is a common notion, comforting to methodological individualists, but quite problematic, if not simply wrong.

Basu's third big idea is that the Principle of Free Contract, according to which any agreement between two mature, sane, individuals that does not harm third parties should in principle be permitted. This principle knows of no exception in economic theory, although every economist knows that there are a host of voluntary transactions that are prohibited in all known modern societies. For instance, if I am rich and I like to eat human eyes with my eggs at breakfast, and if every day there is some poor soul who is willing to sell one of his eyes to feed his starving family, a voluntary exchange between the two individuals is illegal in virtually every society. In most societies, all trade for bodily organs is prohibited.

The logic underlying what voluntary trades are and are not permitted is a deep and unknown issue. Basu's goal is to determine when such economic institutions as child labor and yellow-dog contracts (a worker signs an agreement not to join a union as a condition of employment) should be permitted following the Principle of Free Contract and when they should not. Basu's argument is subtle and nuanced, and does not come to any particular conclusion. He argues that even though any one instance of, say, child labor, should be allowed according to the principle, when such an institution becomes universal, it can be deeply inefficient. For instance, one more child worker will not change the adult wage, but if all children work, the adult wage will fall. There might be a second equilibrium in which no children work and the adult wage remains high enough to support the non-working children.