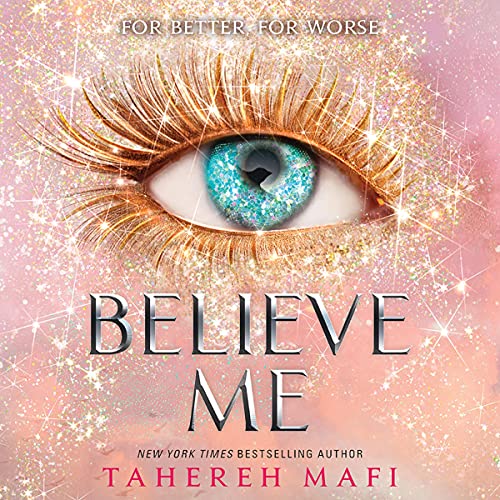 Believe Me: Shatter Me, Book 7

The brand-new and devastatingly romantic final instalment in the best-selling Shatter Me series.

Juliette and Warner fought hard to take down the Reestablishment once and for all. Life in the aftermath isn’t easy, as they and their friends at the Sanctuary work with their limited resources to stabilise the world.

Warner has his sights set on more than just politics. Since he proposed to Juliette two weeks ago, he’s been eager to finally marry her, the person he loves more than anything and has endured so much to be with. But with so much chaos around them, it’s been nearly impossible for them to have a wedding. And even Juliette has been distracted by everything they need to do.

At long last, Warner and Juliette’s future together is within reach, but the world continues to try to pull them apart. Will they finally be able to be happily, officially, together?

Celebrate the 10th anniversary of Tahereh Mafi's best-selling Shatter Me series with Believe Me!

Sophie T.
1,0 sur 5 étoiles Explicit Sexual References - IMO not suitable for under 16s
Commenté au Royaume-Uni 🇬🇧 le 1 février 2022
Achat vérifié
I bought this book for my 14 year old daughter for Christmas, as she had already read the other 8 books in the series. I have since found out that the 'romantic' scenes are basically soft porn. This final instalment appears to be the worst (including a description of the heroine giving her lover oral sex) but my daughter says that there are other similar love scenes in the other books. I am shocked that it is recommended for 14 year olds (considering many will think it therefore suitable for younger children) and the amazon listing did not contain a warning so that I could have made an informed decision as to whether this was suitable for my daughter, before she read it.
En lire plus
3 personnes ont trouvé cela utile
Signaler un abus
Traduire les commentaires en Français

Inner Angels Store
3,0 sur 5 étoiles Bit of a letdown
Commenté au Royaume-Uni 🇬🇧 le 17 novembre 2021
Achat vérifié
I was looking forward to the final instalment of this series. It was like a short story roughly 161 pages... I have scanned amazon trying to figure out if I had ordered the wrong thing. Disappointed that this was the end of a great series and the novel was cut completely short.
En lire plus
2 personnes ont trouvé cela utile
Signaler un abus
Traduire les commentaires en Français

Nay
2,0 sur 5 étoiles Not worth the money
Commenté au Royaume-Uni 🇬🇧 le 14 avril 2022
Achat vérifié
I love these books they're one of my favourite series but this Novella is mostly either sections from the last book or teasers for Mafis upcoming work. Normally I wouldn't mind all that but for £6/£7 I find it quite quite a lot.
En lire plus
Une personne a trouvé cela utile
Signaler un abus
Traduire les commentaires en Français

Maddie
5,0 sur 5 étoiles LOVE IT
Commenté au Royaume-Uni 🇬🇧 le 15 février 2022
Achat vérifié
Shatter me is my all-time favourite series so far because of the amount of character development and the amazing enemies-to-lovers storyline. Believe me is the last novella of the series and let me tell you, it is AMAZING! It is slightly mature, so if you don't like smut, you may want to skip this one.
En lire plus
Signaler un abus
Traduire les commentaires en Français
Afficher tous les commentaires