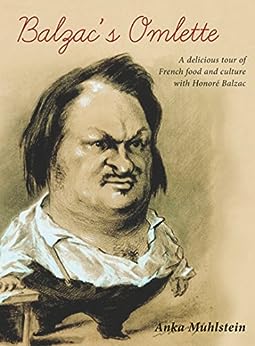 The most astonishing illustration of Balzac’s taste for ephemeral luxury is the meal he had delivered to him in prison; yes, Balzac was in prison for a spell, not for debts but for evading—several times—his duty to serve in the National Guard.
Every citizen who lived in Paris had to spend a few days a year on guard duty, and those who failed were condemned to a day’s incarceration. Deeming this constraint intolerable, Balzac succeeded in avoiding it on numerous occasions, most often by claiming he was traveling or by simulating a house move: he would stay with a friend for a few days and wait for the danger to pass. Sometimes he did not escape in time but wriggled out of the tight spot by offering a few gold coins or a couple of good bottles of Vouvray to the arresting agents…until the day when he eventually had to submit to the law and was unceremoniously dumped at the Hôtel des Haricots, the National Guard’s own prison.
Once he was settled in his third-floor cell, he sent his valet to his publisher, Werdet, with a note asking him to send money.Werdet complied immediately, and went to the prison armed with two hundred francs. To his considerable surprise, Balzac thought the sum miserly but invited him in to dine. He had arranged to have a meal delivered from Véfour, and explained to Werdet that he had deliberately chosen one of the most expensive restaurateurs in Paris because, on his release, he wanted to leave behind memories of “every tradition in the art of fine living.” So, down they went to the refectory at the agreed time and, at one end of a long table, they saw a magnificent meal set for two. It was theirs. The two friends enjoyed a succulent dinner; Balzac proved in excellent humor when, at about seven o’clock, the door opened and another draft-dodger came in: Joseph-François Michaud, editor-in chief of La Quotidienne, a royalist newspaper to which Balzac gladly contributed. Michaud eagerly accepted the invitation to share in Balzac’s “modest” meal, and the evening ended in very high spirits. --Ce texte fait référence à l'édition hardcover.

“This effervescent volume celebrates Balzac’s use of gastronomy as a literary device and social critique.” —The New Yorker

“Fabulous . . . worth nibbling on, as prelude or accompaniment to the pièce de résistance, ‘The Human Comedy.’” —New York Times Book Review

“Muhlstein uses Balzac as a guide to the French culinary scene of the 19th century in a literary analysis that is original, delectable and entirely readable.” —The Washington Post

“An absorbing and insightful portrait of Balzac…and of the role that food played in 19th-century France.” —Wall Street Journal

“Felicitous phrasing, a scholar’s sage scope, and enormous fondness for Balzac’s panoply of characters mark this charming, intimate look at the French novelist’s depiction of the highs and lows of 19th-century French society, as reflected in its culinary offerings... Muhlstein delves lovingly into Balzac’s characters, misers and gluttons alike, and finds the presentation of food an important indicator of social status, and well-cooked food equal to a woman’s love.” —Publishers Weekly

“The story of post-Revolution food in Paris and the rise of food as a literary metaphor, as told through Balzac’s work…Not just for French lit majors—honest.” —France Magazine

“Like the many feasts it describes—historical and fictional—this book presents readers with course after course, carefully crafted to appeal to palates with a taste for history, biography, or literary criticism…Well written and thorough, this title will appeal most to students of French history, lovers of Balzac and his writings, and those with a deep interest in food history...” —Library Journal

“‘Balzac brought meals into literature,’ writes Anka Muhlstein, delivering up an elegant, mouthwatering feast.  Here is food as characterization, as preoccupation, as consolation—a gastronomic tour of 19th century France in which Balzac serves as headwaiter.” —Stacy Schiff, author of Cleopatra: A Life

“Alimentarians great and humble will want to own, read, and reread Balzac’s gastronomic tour of nineteenth-century Paris and the provinces, reconstructed from his food-infused novels with delicacy and brilliance by Anka Muhlstein.” —Jason Epstein, Eating: A Memoir

“This is a superb book, a delightful plunge into 19th century French culture and life in all its glory, a real page turner.  If you love books, the art of writing, or dinner parties, if you revel in France, if travel and culture are your thing, Balzac’s Omelette will please you more than any other book this season. Bon appétit!” —André Bernard, author of Now All We Need Is a Title and Bartlett’s Book of Anecdotes

“Reading Balzac's Omelette is like going to a party where all the guests are brilliant and entertaining, the food is exquisite, and you wish it would never end.” —Jeanne Martinet, author of The Art of Mingling

“For anyone who loves to read, or eat, or both, Anka Muhlstein’s terrific Balzac’s Omelette is a must: the historian takes on the evolution of food in fiction—specifically Balzac’s—with results that I could (but won’t) call mouth-watering. I’m a total food-history nerd, but I don’t think you’d need to be to enjoy what’s ultimately a treatise on the making of modern French culture.” —Sadie Stein, The Paris Review Daily

“Anka Muhlstein folds wit into scholarship as easily as breaking an egg. Let us now join hands and say grace for her brilliant and beguiling Balzac’s Omelette.” —Patricia Volk, author of Stuffed and To My Dearest Friends

“Balzac’s Omelette is perhaps less of an omelette than a light and charming soufflé. Or perhaps a meze, where you can pick and choose among choice bits of information or anecdote at will. And ultimately it has the effect of awakening your appetite for more than food…sending you back to the bookshelf to reread Balzac’s novels themselves.” –The East Hampton Star --Ce texte fait référence à l'édition hardcover.

Anka Muhlstein was born in Paris in 1935. She has published biographies of Queen Victoria, James de Rothschild, Cavelier de La Salle, and Astolphe de Custine, a study on Catherine de Médicis, Marie de Médicis, and Anne of Austria, and a double biography, Elizabeth I and Mary Stuart. She is currently writing a volume on Proust as a reader. She has won two prizes from the Académie Française and the Goncourt Prize for Biography. She and her husband, Louis Begley, have written a book on Venice, Venice for Lovers. They live in New York.

John Oehler
4,0 sur 5 étoiles An intriguing look into the past
Commenté aux États-Unis le 22 février 2013
Achat vérifié
Balzac’s Omelette is for people who appreciate food, restaurants, and the history of dining. If you liked the BBC series, “Breakfast, Lunch, and Dinner,” you’ll like this book. It’s not so much about Balzac’s eating habits, strange though they were, as it is about his use of food and table settings as a character-revealing device. Apparently he was the first to do this.

As a writer, myself, I have used food preferences to reveal character. But I never realized, before reading this book, how much scope there is to expand on this. Balzac was a master.

The other thing this book is about is the origin of restaurants as we know them. This occurred in Balzac’s time and stemmed from the French Revolution, during which many excellent chefs employed by the aristocracy suddenly lost their patrons — to prison, the guillotine, or to their “getting out of Dodge” as fast as they could. These out-of-work chefs opened the first establishments we would recognize as restaurants, with a menu of items to choose from, instead of traditional inn fare which amounted to eating whatever the innkeeper’s wife happened to have cooked that day.

The book also contains interesting tidbits, like the fact that green beans were considered a luxury item.

Balzac’s Omelette isn’t for everyone. But if you like the kinds of things I’ve mentioned above, I think you will enjoy the book.

Words&Music
3,0 sur 5 étoiles A canape, not a whole meal
Commenté aux États-Unis le 19 septembre 2012
Achat vérifié
There are delights in this book. The book itself, as an object is beautifully done, with fine, funny petite illustrations, and the narrative voice is charmant. But it doesn't quite live up to the lovely subtitle: A delicious tour of French food and culture with Honore de Balzac. It is often witty, but not satisfying. You don't need to have read Balzac, or even know much about the 19th century to enjoy this book, but you won't walk away from it knowing much about Balzac or 19th c. France either. There are better books on the post-Revolutionary rise of the restaurant in France. There are better books on 19th c. French cooking and literature, like the long ago reissue of the Dumas cookbook. (Now out of print, sadly.) And the better way to do French food and culture with Balzac is to read his books. At least some of them. He was a man of gargantuan appetites, and a mighty writer as well. However, BALZAC'S OMELETTE is a perfect book to read to give yourself morselettes to throw about at cocktail parties, bits of wit and observation. A canape, not more.
En lire plus
2 personnes ont trouvé cela utile
Signaler un abus
Traduire les commentaires en Français

Christian Schlect
4,0 sur 5 étoiles A Nice Tour
Commenté aux États-Unis le 10 décembre 2011
Achat vérifié
If you hate 19th century French novelists, Paris, or cultural histories of food--do not buy this book. All others will find it interesting and well written.

Anka Mulhlstein's story defies easy categorization. Her small book randomly charts the interrelationship between the consumption and love of food, both at home and in the then newly invented restaurants, by those in the upper rungs of Parisian life during the 1800s. She leans heavily on acute observers of the time, especially Balzac, to capture the essence of this transformational era.

While this by no stretch is a complete or formal history, I did learn many things about food and literature, for which I am grateful to Ms. Muhlstein.

Note: I enjoyed the book's jacket design and artwork, the product of Andreas Gurewich.