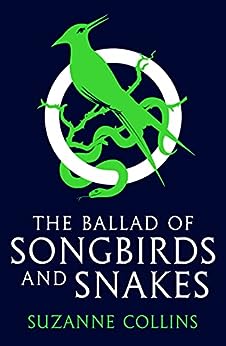 Suzanne Collins is the author of the bestselling Underland Chronicles series, which started with Gregor the Overlander. Her groundbreaking young adult novels, The Hunger Games, Catching Fire, and Mockingjay, were New York Times bestsellers, received wide praise, and were the basis for four popular films. She returned to the world of Panem with The Ballad of Songbirds and Snakes. Year of the Jungle, her picture book based on the year her father was deployed in Vietnam, was published in 2013 to great critical acclaim. To date, her books have been published in fifty-three languages around the world.
--Ce texte fait référence à l'édition audioCD.

"A Hunger Games without Everdeen might have seemed as peculiar as a Potter without Harry, but it works beautifully"

"Collins leaves us with a cliffhanger that doesn't just ask politely for another book, it prostrates itself and begs. Please don't make us wait another decade." --The Times --Ce texte fait référence à l'édition kindle_edition.

The Ballad of Songbirds and Snakes will revisit the world of Panem sixty-four years before the events of The Hunger Games, starting on the morning of the reaping of the Tenth Hunger Games. --Ce texte fait référence à l'édition kindle_edition.
En lire plus

Arkham Reviews
4,0 sur 5 étoiles Fascinating Character Study
Commenté au Royaume-Uni le 25 mai 2020
Achat vérifié
This is such a difficult novel to review, despite the fact that I actually enjoyed reading it, as I don't think that it is what a lot of fans were expecting. The Hunger Games Trilogy featured fast-paced violence and a strong female protagonist. Due to the focus on Coriolanus Snow, this prequel has an entirely different feel. It is a much slower novel, focusing more on the world-building and philosophy that would eventually shape Snow into the tyrannical president of Panem.

The world-building of this novel is captivating. It is set 64 years before the events of The Hunger Games and only 10 years after the war. Due to this, we see Capitol in a very different light. The city is still war-torn and rife with poverty. The Hunger Games exists, but is a primal shade of what it would later become. Everyone bares scars of what happened in the conflict and would rather forget what happened. I personally found it interesting to see Panem in such a state, especially as Snow and his class gradually began to shape The Hunger Games into something closer to what fans will recognise.

Yet, I did sometimes think that the novel was too heavy-handed with its call-backs. While some of the minor changes, such as the introduction of sponsors and betting to the Hunger Games, were nice little nods, other things were less subtle. This was particularly obvious in the final section of the story, in which Coriolanus witnesses the origin of The Hanging Tree song and gains an irrational hatred of Mockingjays. Yeah, that is certainly on the nose.

In terms of pacing, I do think that this book has the potential to divide fans. Due to its focus on Coriolanus, it is no where near as fast-paced as the other books. After all, Coryo is a stage removed from proceedings. He is not in the arena fighting - he is watching from the safety of the mentors' box. What this did give the time for was more of a character study. We followed Coriolanus in his daily life within the Capitol as he attended school and mentored Lucy Gray. This allowed readers to see Panem from the other side - a world that is far different from the empoverished life of Katniss Everdeen.

Yet, at times, the novel could be incredibly slow. While I was utterly captivated by the first two-thirds of the novel, the section after the climax of the 10th Hunger Games did start to lose me a little. Coriolanus's time in District 12 was surprisingly uneventful for the most part. While things did pick up again over the last 40 pages, for the most it seemed to be a bit of a come down after the excitement of the Games.

In terms of character, the novel was also perhaps a little varied. As a character study of Coriolanus Snow, it was spectacular. Coryo is a fantastically complex character. His empoverished upbringing and desire to protect his family could have made him incredibly sympathetic, but this was offset by his ambition and underlying nationalism. Even at his most vulnerable, there was always a sense that Coryo would do anything to come out on top, which prevented him from ever being truly likeable. As a villain origin story, I would say that this was incredibly effective. You could certainly understand Coriolanus, but you could never like him.

Yet, while there was a large supporting cast, most of these faded into the background. This was, in part, because Coryo was so self-serving that he never really paid much attention to him. The two that really shone were Lucy Gray and Sejanus. Lucy Gray made for a compelling love-interest who was refreshingly different from Katniss. While her motivations were occasionally a little hard to grasp, she was very lovable and served as a representation of how different Coriolanus's life could be.

Sejanus was also a fantastic character as he represented new money - a character unable to fit in with the Districts or the Capitol. Although his naivety grew more and more frustrating as the novel progressed, the situation he was in was terribly sad and held a mirror up to Coryo. Here was a person who had a similar education to Coriolanus, but his upbringing allowed him to see the world in a very different light.

All in all, I actually really enjoyed reading this novel. While I can see why some fans were disappointed, I found it to be a wonderful character study that added a lot of depth to the series's villain. It's definitely one that I wold recommend.
En lire plus
57 personnes ont trouvé cela utile
Signaler un abus
Traduire les commentaires en Français

The Schoolkeeper
5,0 sur 5 étoiles A real prequel for once
Commenté au Royaume-Uni le 22 mai 2020
Achat vérifié
Most prequels I’ve read are pretty annoying because they’re not really prequels at all, more like continuations of the original story from before rather than after the main timeline. This isn’t one of those. It’s set 64 years before the first Hunger Games story in a Panem that’s barely recovered from the rebellion. The Capitol is precariously balanced at a place where the Old Order and the New Money are seesawing for control. In some ways it reminded me of the Atlanta in Gone with The Wind where the same thing was happening. The Capitol characters have surnames familiar to reader of the original trilogy Heavensbee, Crane and of course Snow.

Amechatclotho
4,0 sur 5 étoiles A trip backwards in time - Coriolanus's POV
Commenté au Royaume-Uni le 20 mai 2020
Achat vérifié
What this book is: A book in the form of a character sketch for the development of both President Snow, and The Hunger Games.
What this book is not: Fully immersive into the different districts, a full accounting of President Snow's rise to power.
Whilst I love The Hunger Games, and a fan of YA/NA dystopia, I was a bit disappointed in BoSaS. Told completely from Coriolanus Snow's point of view, it centres around the period shortly after the great war - when both he and the Hunger Games were in the process of change and development.
There was a noticeable attempt to conjoin this prequel to its subsequent time-delayed sequels, with often repeat callbacks to songs, names and references which are so blunt it feels like they have just been jammed in to 'lay the foundations' for The Hunger Games trilogy. It felt clumsy, grating, and quite superficial - with very little character development or depth - in fact, the most action happens in the last 20 or so pages, and feels entirely rushed at the end - and abruptly breaks off - making me wonder if Collins is planning another prequel-sequel - which would leave Coriolanus's teenage years behind and examine his development of the 30s-60's. It provides no content or understanding of the next three books in the series, which was a major disappointment. I had read expecting there to be some reference perhaps towards the end. This is a standalone book.
This is still an excellent book for understanding the structure of The Hunger Games in it's early development, but ironically, it lacks the charm and depth of any of the other three books in the series.
En lire plus
28 personnes ont trouvé cela utile
Signaler un abus
Traduire les commentaires en Français

Mrs Georgina A Howell
5,0 sur 5 étoiles Wowie
Commenté au Royaume-Uni le 19 mai 2020
Achat vérifié
I can just tell by the start tha tgis is the best yet! I love the description of the Grandma.
I think this is the first review....
Well its amazing, buy it. Its like it is glued to your hands once you buy it!
Well done Mrs Collins.
En lire plus
28 personnes ont trouvé cela utile
Signaler un abus
Traduire les commentaires en Français

Tamsyn Carne
5,0 sur 5 étoiles Set aside a day...
Commenté au Royaume-Uni le 19 mai 2020
Achat vérifié
Like many I was dubious when this book was announced, thinking it was a money making exercise stretching out the franchise (looking at you JKR)
However, I could not have been more wrong. This story is riveting- I read the whole thing in 4 hours and just could not put it down.
So many Easter Eggs for HG fans, origins and explanations.
I’m truly hoping there will be more to this one story, I found it more engaging than the original trilogy.
En lire plus
24 personnes ont trouvé cela utile
Signaler un abus
Traduire les commentaires en Français
Afficher tous les commentaires
Retour en haut
Pour mieux nous connaître
Gagnez de l'argent
Moyens de paiement Amazon
Besoin d'aide ?
© 1996-2021, Amazon.com, Inc. ou ses filiales.