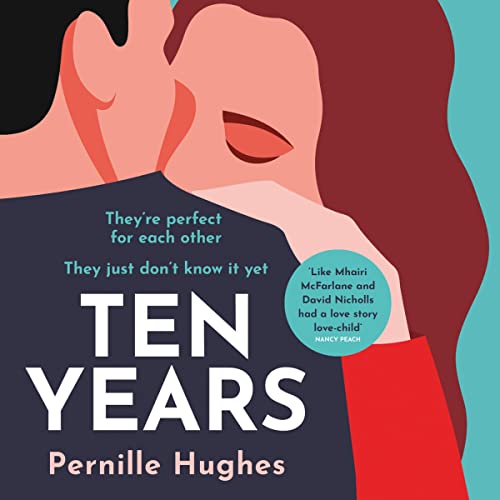 ‘Some days I feel like I’ve lived more than one lifetime, so, couldn’t we be right for each other this time around?’

Becca and Charlie have known each other since university.

Becca and Charlies have also hated each other since university.

Until now. Until Ally’s bucket list. The death of their loved one should mean they can go their separate ways and not look back. But completing the list is something neither of them can walk away from.

Over the course of ten years, Becca and Charlie’s paths collide as they deal with grief, love and life after Ally.

Not since Emma and Dex in One Day and Will and Lou in Me Before You will you root for a couple as much.

Kindle Customer
4,0 sur 5 étoiles Enemies to friends to enemies to ...
Commenté au Royaume-Uni 🇬🇧 le 24 septembre 2022
Achat vérifié
Charlie so passive, Becca such a grumpy gobshite, so easy to want to shake them and then you find yourself rooting for all their possibilities. Brave to make the female lead so covered in thorns that you're convinced, as a reader, that you'll never warm to her and having the faith, as the author, to know that we will. A thoroughly enjoyable read and now I'm off in search of some more stories from Ms Hughes's pen.
En lire plus
3 personnes ont trouvé cela utile
Signaler un abus
Traduire les commentaires en Français

RosieT
5,0 sur 5 étoiles Engaging, Emotional and Entertaining
Commenté au Royaume-Uni 🇬🇧 le 21 novembre 2022
Achat vérifié
Read this in a couple of days. Everyone deals with grief differently and I felt the author perfectly captured the conflicting emotions of the two bereaved protagonists struggling to come to terms with the loss of their partner and best friend. So much more than a rom-com; I thoroughly enjoyed the caustic banter between Charlie and Becca, and the plot revolving around the tasks was original and entertaining.
En lire plus
Une personne a trouvé cela utile
Signaler un abus
Traduire les commentaires en Français

Avid Reader
5,0 sur 5 étoiles A RomCom with guts
Commenté au Royaume-Uni 🇬🇧 le 11 octobre 2022
Achat vérifié
This is a RomCom that reads like a thriller. It has the mandatory romance and comedy but also has that added dimension of depth and staying power. It evokes strong feelings towards the characters and the situations they find themselves in, sometimes hilarious and sometimes emotionally moving. Self-reflection is a recurring theme in the development of the story and keeps the reader intrigued and gripped, as in any good thriller. There are some very insightful observations of people and events too. Excellent read.
En lire plus
Une personne a trouvé cela utile
Signaler un abus
Traduire les commentaires en Français

Donnashc
5,0 sur 5 étoiles Warm, funny and brilliantly written
Commenté au Royaume-Uni 🇬🇧 le 29 septembre 2022
Achat vérifié
I really enjoyed this friends to lovers romance. It had me laughing out loud in places, it was original, the characters were likeable, believable and I genuinely couldn't put it down. When I did finish, I had a huge smile on my face because I'd been rooting all the away along for Becca and Charlie to get their HEA.
En lire plus
Une personne a trouvé cela utile
Signaler un abus
Traduire les commentaires en Français