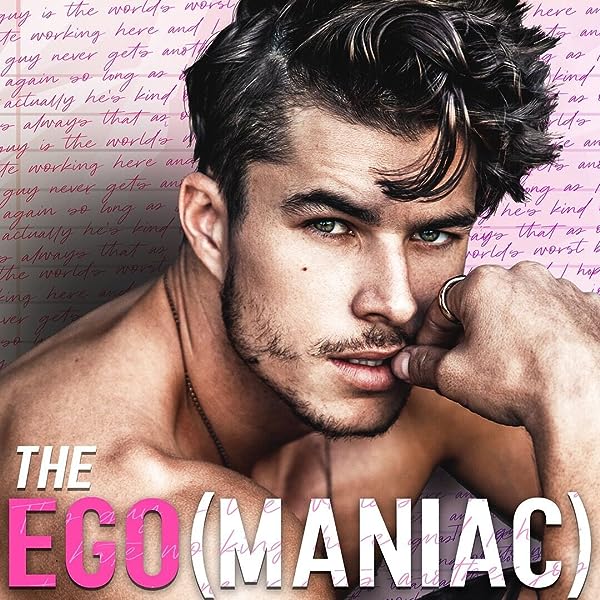 The second novel in USA Today bestselling author Penelope Bloom’s Anyone But… series turns up the heat and hilarity with a story about second chances and promises worth breaking.

After Cade King cost me everything, I vowed I’d never fall for him again―even if he became rich and megafamous.

Now he’s back, and he’s still the embodiment of a big, shiny red button. Everybody knows you shouldn’t touch red buttons, but it’s so, so hard to resist.

I’d be lying if I said I didn’t enjoy it a little when I arrested him for disorderly conduct. Unfortunately, I think Cade liked it a little too. So when he asks for my help raising the son he just found out about, I know exactly what to say: “No, you stupidly sexy red button. I won’t touch you, even to help a cute little kid.” You’re damn right that’s what I said. Mostly.

Still, Cade doesn’t know the first thing about commitment. He lives completely in the moment. I’d need to have a recurring case of amnesia to believe he could change, even for his son. Or me.

Penelope Bloom is a USA Today, Amazon, and Washington Post bestselling author whose books have been translated into seven languages. Her popular romances include His Banana, Her Cherry, Savage, and Punished.

Her writing career started when she left her job as a high school teacher to pursue her dream. She loves taking her imagination for a spin and writing romances she’d want to live. She likes a man with a mind as dirty as sin and a heart of gold he keeps hidden away. Her favorite things include getting to wear socks all day―pants optional―and being a positive example for her girls. Showing her daughters that no dream is too big, no matter what anyone tells them, is worth all the late nights, doubts, and fears that come with being a writer.

LindalooKam
5,0 sur 5 étoiles Brilliant
Commenté au Royaume-Uni le 22 janvier 2020
Achat vérifié
Loving these books. Loving the storylines and the characters and their connections with each other. Loved Cade and Iris and ao glad they had the happy ever after they so deserved
Bear was absolutely adorable. Loved the way he tried copying Cade but also grounded Cade too
En lire plus
Signaler un abus
Traduire les commentaires en Français

JuttaS
5,0 sur 5 étoiles Really enjoyed it
Commenté au Royaume-Uni le 25 août 2021
Achat vérifié
Well this certainly didn't disappoint. I was so eager to read Cade's story and I loved it. It made me chuckle and snigger and get a lot of funny looks from those around me. Such a good read and I loved the cameo!
En lire plus
Signaler un abus
Traduire les commentaires en Français

Jackie
5,0 sur 5 étoiles Love Cade!
Commenté aux États-Unis le 12 novembre 2019
Achat vérifié
Penelope Bloom is back with another battle of banter romances between the King brothers and the women who made a pact to never fall for their witty charms again!

Well, this time around, it's Cade Kings turn up on stage to do his best to woo the ever so enchanting, batton wielding Iris the enforcer back into his arms.

He has his work cut out for him- she'd love nothing more than to lock him up and throw away the key, with his mouth duct-taped, of course. Fate may have to step in and throw him an adorable bone!
What they do with all of the swirling, confusions of feels?....
I am all in with the King Brothers!
Fantabulous characters with unique lovable personas, the banter, and internal dialogue in this book were hilarious!
This was good because I got to say I had a hard time getting past Miranda's arrogant attitude. Was she like that in the first book? I don't remember her being so snooty? Is this a set up for her story? All I know is, I wanted to take Iris's batton and smack Miranda with it. j/s
Regardless, In pure Ms. Bloom fashion, she delivered a deliciously funny, sexy, heart of hearts second chance romance that begs to be read!
I look forward to the next book in this series!
En lire plus
5 personnes ont trouvé cela utile
Signaler un abus
Traduire les commentaires en Français

Page Turner
3,0 sur 5 étoiles Almost had me
Commenté aux États-Unis le 16 novembre 2019
Achat vérifié
I read the previous book and pretty much hated it. This one was actually quite funny in the way promoted (the RICH book had not been) until I hit page 179 of 229. Then it took a serious nose dive with the ridiculous cartoon character villans. At least it made it 3/4 of the way through before it was ruined. Gotta check to make sure the third one doesn't show up. A bit sad because I thought this one might actually be the book I've been hoping for....some great laugh out loud moments in the first half of the book - if you can put it down on page 175 you even get the happy ending as well as the laughs. Hint to the author. Ditch the parents. They aren't just ruining their son's lives. They are ruining your books. We
En lire plus
5 personnes ont trouvé cela utile
Signaler un abus
Traduire les commentaires en Français

Linda Reads
5,0 sur 5 étoiles Literally LOL funny, steamy with irritating and wonderful moments
Commenté aux États-Unis le 15 novembre 2019
Achat vérifié
Having read ANYONE BUT RICH about Rich, twin brother to Cade, I already knew that Cade and Iris would be a formidable couple, both witty, outrageous and caring. And again, Ms. Bloom has pulled out all the stops. This book was HILARIOUS. She should consider doing standup comedy, so funny! Her narratives are literally LOL funny and that’s not how I usually read…laughing!
Cade and Iris had a thing in high school until he did one of his more ridiculous stunts which changed everything. Fast-forward seven years and the brothers have returned as billionaires and Iris is trying so hard to hold onto her anger with Cade. His antics make that really difficult even more so when he’s faced with a problem he never expected. Who is there to help him out? Iris.
There are times when I couldn’t decide if Cade was more sweet-ish or childish. So many funny moments: Iris pretending to type at the station; Cade’s baby-pool in the living room; “bone apple tea”; the bj on the diving board; when Grammy from HER CHERRY appears; lastly, anytime the brothers banter together, including Nick. I so hope we get Nick’s story soon…
I volunteered to review an ARC of this book through NetGalley and it comes highly recommended. I give it 10 Stars!
En lire plus
3 personnes ont trouvé cela utile
Signaler un abus
Traduire les commentaires en Français
Afficher tous les commentaires