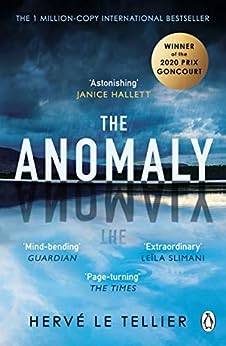 THE NO. 1 INTERNATIONAL BESTSELLER. WINNER OF THE 2020 PRIX GONCOURT. 1 MILLION COPIES SOLD.

'Just when you think you've worked it out . . . well, you probably haven't' DAILY MAIL
'Mind-bending. Written with page-turning conviction' THE TIMES
'A mind-bending, prize-winning speculative thriller' GUARDIAN
'An intoxicating mix of the magical and life's big questions' FINANCIAL TIMES
_______

No one knows how it happened. But it'll change their lives forever . . .

For every passenger, there are now two: a double with the same mind, body and memories.

Only one thing sets them apart - while one plane lands in March, the other doesn't arrive until June.

Nothing can explain this unprecedented event. But for each duplicated passenger, an impossible moment of reckoning awaits.

'I absolutely love this book. It's a one-of-a-kind story, with perfect pacing. I would highly recommend' 5* Reader Review

'An incredible read - intriguing and original. Keeps you fascinated until the very last page' 5* Reader Review

When flight Air France 006 enters a terrifying storm, the plane - inexplicably - duplicates. For every passenger on board that day, there are now two - a double with the same mind, body and memories.

Just one thing sets them apart. One plane leaves the storm in March. The other doesn't land until June. For world leaders, the emergence of the June flight raises serious alarms. No science, faith, or protocol can explain this unprecedented event.

But for the passengers, a bigger question is at stake. Wh

Hervé Le Tellier is a writer, journalist, mathematician, food critic, and teacher. He has been a member of the Oulipo group since 1992 and one of the "papous" of the famous France Culture radio show. He has published numerous books of stories, essays, memoir, and novels, including the Goncourt Prize-winning The Anomaly, which has sold more than one million copies worldwide, All Happy Families, Electrico W, and Enough About Love.

Adriana Hunter studied French and Drama at the University of London. She has translated more than ninety books, including Véronique Olmi's Bakhita and Hervé Le Tellier's Eléctrico W, winner of the French-American Foundation's 2013 Translation Prize in Fiction. She lives in Kent, England.

Livfoss
4,0 sur 5 étoiles Very interesting, original and well written. Good translation
Commenté au Royaume-Uni 🇬🇧 le 11 février 2022
Achat vérifié
While I was reading this version, my wife was reading the book in French, so we were able to discuss the quality of the translation which we found excellent. The story is original (no spoilers here - this is not a proper book review) and contains an element of fantasy which allows the author to explore some original "what if" ideas. There are multiple characters, well realised, who each have to react to the unique situation created by the author. There is a lot of well-researched detail which makes the narrative really interesting. The book needs close attention. I really liked it.
En lire plus
15 personnes ont trouvé cela utile
Signaler un abus
Traduire les commentaires en Français

P. G. Harris
5,0 sur 5 étoiles That’s great, it starts with an earthquake, birds and snakes, an aeroplane…
Commenté au Royaume-Uni 🇬🇧 le 3 mars 2022
Achat vérifié
The Anomaly is tremendous fun. It doesn’t reach the heights if the greatest science fiction, but it is original, entertaining and enjoyable while it lasts.

It starts with chapters dedicated to a series of characters with nothing in common except they experienced turbulence while on a transatlantic flight. They include a ruthless hitman who lives a double life as the owner of a vegetarian catering business, a troubled author, a hot shot lawyer working for a questionable business, a disturbed veteran of overseas wars, a gay rapper, a film editor in a decaying relationship with an older architect, a terminally ill pilot. We are also introduced to two geeky mathematicians, Adrian and Meredith, circling around each other on the edge of a relationship.

Author Hervé le Tellier has fun while setting up his characters, while also allowing some more serious and darker currents to flow. He uses the troubled author to show the ridiculous pretentious side of the French literary establishment. While geeky mathematicians might seem a relatively easy target, treats them with affection, and, indeed, Adrian and Meredith’s first reactions to each other are an absolute delight. I also have to say, I never though I’d care so much about the fate of a pet frog. On the dark side, there is the cold blooded assassin, questions about corporate morality, homophobia in the world of hip hop, and a disturbing section about child abuse.

All of the stories are brought together in the central concept of the book (pre-publicised in the blurb, so no spoilers here), when a plane carrying the characters (excluding our mathematicians) flies out of a storm on its way to land in the US. The problem is that the same plane, with the same crew and passengers landed 106 days previously and all on board have since carried on living their lives for three months.

The rest of the book is then concerned with the questions of what the authorities will do to deal with the situation, how the individuals will react to meeting themselves, and what caused the anomaly in the first place. The authorities range from a statesmen like Macron, to an unnamed but obviously second term Trump, who is portrayed as an idiot out of his depth rather than a malicious nationalist, and a predictably secretive Chinese government.

The greatest weight is given to the individual stories which explore a range of responses, how does a secretive killer react to having himself around? How do those in relationships deal with the inevitable jealousy? How do the extra three months of those on the original plane alter the situation? Can mistakes be corrected with the extra knowledge?

In terms of the wider picture, three possible explanations for the duplication of the plane are explored, although the “true one” is quickly evident. It is here that I had my one major quibble with the book. Le Tellier’s choice to concentrate mainly on the individual tales left me feeling slightly dissatisfied. Not fully exploring the wider implications (even though the explanation is fundamental to the denouement) leaves the book, to my mind, with a bit of an unfulfilling vacuum. Also while I am at it, I didn’t really see the point of the child abuse storyline, there is no depth to it, which makes it seem rather exploitative.

However, overall, if one accepts Le Tellier’s choices and takes the Anomaly for what it is, a flashy, fast paced thriller based on a highly original premise, it certainly delivers. Coming soon to a cinema near you (I would expect).
En lire plus
7 personnes ont trouvé cela utile
Signaler un abus
Traduire les commentaires en Français

Heligany
2,0 sur 5 étoiles Worst ending since LOST
Commenté au Royaume-Uni 🇬🇧 le 28 janvier 2022
Achat vérifié
It took ages to establish the characters, too long, and then there was the incident. By this point you could see there werent enough pages left to do the job. And indeed the ending was so rushed it felt wrong.

Overall it was disappointing. Very overhyped.... I dunno what the editors were thinking.... its clear the writer was thinking time to wrap up. it reads like he lost interest!
En lire plus
9 personnes ont trouvé cela utile
Signaler un abus
Traduire les commentaires en Français

Amazon Customer
3,0 sur 5 étoiles Overhyped
Commenté au Royaume-Uni 🇬🇧 le 9 février 2022
Achat vérifié
There is a lot of hype around this which is really not warranted in my opinion - congrats to the marketing department! 🤣

The story is okay - the central idea is a rehash of existing ideas rather than anything strikingly new, and was very nearly a disappointment after a lengthy build-up...but the combination was cleverly put together and the second act in particular made for an interesting read. I felt the third act lost all momentum and was a bit of an effort to get through. On balance, I wouldn't recommend it.
En lire plus
8 personnes ont trouvé cela utile
Signaler un abus
Traduire les commentaires en Français

J. Ornstin
4,0 sur 5 étoiles Fascinating but frustrating
Commenté au Royaume-Uni 🇬🇧 le 15 mars 2022
Achat vérifié
A thoroughly stimulating and excellent novel. Really thought provoking on one level. But.... it really was more of a romp, rather than meditation on the themes it dealt with. Spoiler alert: was it Spacetime folding over itself or a test through parallel programming, if so, why would the programmers react to the specific attack at the end, (as opposed to any other atrocity) in the way is described in the conclusion. For me, that could have been a great starting point of a different work. I highly recommend it nevertheless
En lire plus
3 personnes ont trouvé cela utile
Signaler un abus
Traduire les commentaires en Français
Afficher tous les commentaires
Signaler un problème
Cet article contient-il des contenus inappropriés ?
Rapport
Pensez-vous que cet article enfreint un droit d'auteur ?
Rapport
Est-ce que cet article présente des problèmes de qualité ou de mise en forme ?
Rapport