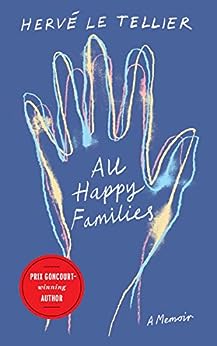 DIALECTIC OF A MONSTER

Listen to your father, who gave you life, and do not despise your mother when she is old. PROVERBS  23:22

So, apparently it’s scandalous not to love your parents. Scandalous to wonder whether you should be ashamed because—despite your youthful efforts—you failed to find in your heart such a commonplace feeling as filial love. A child’s indifference is forbidden. Children are forever imprisoned by the love they spontaneously feel for their parents, whether the latter are good or cruel, intelligent or stupid, in a word, lovable or not. Behaviorists call these widely acknowledged, indisputable manifestations of affection “imprinting.” An absence of filial love not only is an insult to decency, but also stabs in the back the edifice of cognitive sciences.
I was twelve years old. It must have been eleven o’clock in the evening and I was not yet asleep, because it was one of those very rare nights when my parents had gone out to dinner. Left alone, I was meant to be reading, probably Isaac Asimov, or Fredric Brown, or Clifford D. Simak. The telephone rang. My first thought was: it’s the police, there’s been a car crash, my parents are dead. I say “my parents” to simplify (you should always simplify), because I actually mean my mother and stepfather.
It wasn’t the police. It was my mother. They were running late; she wanted to reassure me.
I hung up.
It occurred to me that I hadn’t been worried. I’d imagined their demise with no feelings of panic or sadness. I was amazed to have so quickly accepted my status as an orphan, and appalled by the twinge of disappointment when I recognized my mother’s voice.
That’s when I knew I was a monster.

I was informed that Serge had died one sunny afternoon. Serge was my father, my actual father. I was being driven to the Manosque literary festival. I remember that, as well as the driver, the car contained at least the poet Jean-Pierre Verheggen and the writer Jean-Claude Pirotte. My cell phone rang; I didn’t recognize the number and picked up. It was my sister. I say “my sister” when she is in fact my half sister, even though I’ve never been definitively conscious of having a half sister. She is seven or eight years younger than I am, the fact that my stepfather has adopted me means we don’t have the same family name, and we must have met half a dozen times in our lives. Still, I did at some stage realize that she had burdened me with the heroic, mythologized mantle of the faraway big brother, an imaginary ceremonial garment that made me her brother while nothing succeeded in making her my sister. But I’d decided against pointing out this deceptive and elementary psychological truth to her. It was several years since we’d last spoken.
“Our father is dead,” she said.
I watched the Provençal landscape spool past along the freeway, and found nothing to say in reply.
She and I both experienced a form of paternal absence, because I had never really known him, while she had left our father’s house when she was fifteen to move in with her mother, and had rarely seen him since. In fact, this missing “father” compartment in both our lives was the only concrete subject of our very sporadic conversations. The difference between us was that I’d ended up resigned to his absence but she, who had spent her childhood with him, had never managed to come to terms with it and it pained her. On this particular morning, what she had actually lost was our absence of a father.
“Our father’s dead,” she said again.

“Really? When did he die?”
I was aware of silence settling over the car. That’s often the effect you get with the word “die.”
She told me briefly that he had been taken to the hospital for breathing difficulties, that his condition had deteriorated and he had died of an embolism in the night.
I made inquiries about practical details, the date and place of the funeral. I thought of offering her my condolences, but that seemed rather indelicate. I feigned sadness for another good minute, then hung up. Jean-Pierre Verheggen was watching me with some concern.
To reassure him, I said, “It’s nothing. My father’s dead.”
Jean-Pierre laughed and that’s when I knew I was a monster.

“What distinguishes Le Tellier’s memoir from the glut of family memoirs that have captivated and horrified readers over the last twenty years? In part, it’s the author’s plastic imagination: his willingness to let language loose on the discoveries he’s made about the family…he brings warmth and intelligibility to cold, lost lives.” —Kenyon Review

“All Happy Families pulls apart the fabric of a dysfunctional family to show its underpinnings, complex and heartbreaking, delicate and nuanced…Le Tellier’s masterful writing does his characters justice while not letting them go unscathed, and his ability to see his life and his family with tenderness and love is a blueprint for how we can continue in the face of our pasts. A tender and moving read, its stories stayed with me long after the last page.” —Tanya Marquardt, author of Stray: Memoir of a Runaway

“Romantic and atmospheric, this novel also benefits from a particularly fine sense of place and time...witty, sad, and interesting.” —Publishers Weekly

Queen Margo
5,0 sur 5 étoiles True to Life
Commenté aux États-Unis le 20 août 2019
Achat vérifié
I always thought that my mother was unique in her inability to be a mother, so finding that Hervé le Tellier had one exactly like mine was a complete surprise. His step father also was very much like my stepfather. And my biological father was equally absent and contact with his side of the family was always awkward. So naturally, I could completely identify with Tellier's story - I felt I could have written the same. The last, conclusive paragraph also resonated with me. The author learned to accept his family as is (or was), realizing that he was able to build a fulfilled life on his own, that friends provided warmth and closeness lacking from his parents, and that in some ways growing up under less than ideal circumstances might have been advantageous in some way. One may wonder how he could write about the subject so dispassionately, but I know I can talk about it as dispassionately, something I was not able to do when I was younger and still angry that I did not have a family I would have wanted. It would appear that it took him many years also to come to terms with it. The result is an excellent piece of literature.
En lire plus
Signaler un abus
Traduire les commentaires en Français

NY Times Book Critic
5,0 sur 5 étoiles stays with me
Commenté aux États-Unis le 21 mai 2019
Achat vérifié
The writer is one of the best of the current Oulipo (check out "Enough About Love"). The tone of this book is far less sunny than previous things I have read from him, partly because it is about his life, his childhood, his relationship to his parents. I haven't finished it yet. I have put it down a few times to simply contemplate some stuff in my own life...
En lire plus
Signaler un abus
Traduire les commentaires en Français
Afficher tous les commentaires
Retour en haut
Pour mieux nous connaître
Gagnez de l'argent
Moyens de paiement Amazon
Besoin d'aide ?
© 1996-2021, Amazon.com, Inc. ou ses filiales.