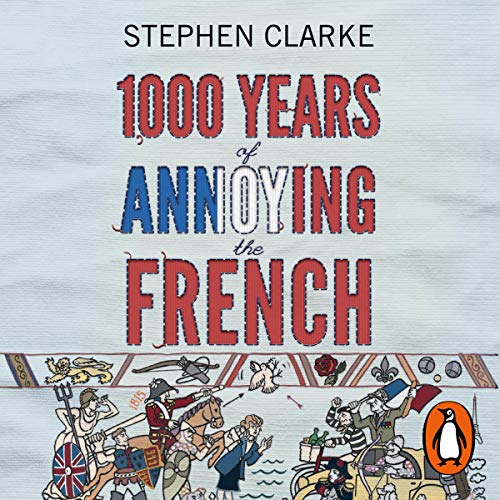 1000 Years of Annoying the French

Was the Battle of Hastings a French victory?

Non! William the Conqueror was Norman and hated the French.

Were the Brits really responsible for the death of Joan of Arc?

Non! The French sentenced her to death for wearing trousers.

Was the guillotine a French invention?

Non! It was invented in Yorkshire.

Ten centuries' worth of French historical 'facts' bite the dust as Stephen Clarke looks at what has really been going on since 1066....

Uncle Beasley
2,0 sur 5 étoiles Not funny...
Commenté en France le 5 avril 2015
Achat vérifié
Historically poor, mildly entertaining, but if you really don't like the frogs, then you need something more spicy. If it wasn't for the intriguing title, Clark wouldn't sell his books on their content alone.
As to the ones relating to that Brown Smelly Matter, they are worse. Reading for the "unwashed" Poms. (it's an expression, I didn't say the Brits don't wash).
En lire plus
Une personne a trouvé cela utile
Utile
Signaler un abus
Traduire les commentaires en Français

Kalimera
5,0 sur 5 étoiles It even makes the French laugh.
Commenté au Royaume-Uni le 17 janvier 2022
Achat vérifié
The title speaks for itself. It's funny, irreverent and tongue-in-cheek without being offensive to our closest neighbours. Even they secretly admit to the occasional giggle though they hate the idea that it was the Brits that invented their trusty guillotine. Read and laugh!
En lire plus
Signaler un abus
Traduire les commentaires en Français

BrusselsAl
5,0 sur 5 étoiles Brilliant humorous look at real history
Commenté au Royaume-Uni le 28 août 2018
Achat vérifié
I had to buy a second copy of this: my French Director General stole the first copy before I could even open the cover! He enjoyed it as much as I did. The book gives a real sense of the fundamental differences between the French and English attitudes to life and warfare throughout history. It is brilliantly written without crossing over into flippancy. By the way, the boss read it before I did and enjoyed it just as much.
En lire plus
3 personnes ont trouvé cela utile
Signaler un abus
Traduire les commentaires en Français

M. G. Brookes
5,0 sur 5 étoiles The Roots of Prejudice
Commenté au Royaume-Uni le 25 avril 2014
Achat vérifié
Ever wondered why the most unmissable game in the Six Nations is England v France? Why do the spectators in Rugby clubs up and down England happily cheer on any of the other four teams that is up against the French one, not really caring who wins so long as the French are well and truly stuffed? Who knows, but it's a very ancient and deep rooted prejudice, and its 1000 year history is entertainingly surveyed and summarised in this delightful book. Ideal chuckle material for non-historians and guaranteed to confirm any Englishman's view of Cross Channel affairs
En lire plus
4 personnes ont trouvé cela utile
Signaler un abus
Traduire les commentaires en Français

Amazon Customer
5,0 sur 5 étoiles Zut alors !
Commenté au Royaume-Uni le 4 août 2016
Achat vérifié
A must-read, especially if you are venturing to France this summer. My problem is that I can't remember the many interesting little stories that we make such good put-downs for our cousins terrible across the Channel........or should that be la manche ! Enjoy the read with a good croissant and revel in the fact that such a delightful pastry was of course an English invention !! Want to know more.............buy this book !!
En lire plus
2 personnes ont trouvé cela utile
Signaler un abus
Traduire les commentaires en Français

M. Olbrich
3,0 sur 5 étoiles Could do better - but the French will be somewhat annoyed
Commenté au Royaume-Uni le 3 juillet 2011
Achat vérifié
The book delivers facts and circusmatnces really well. What it is missing is the usual Clarke's wit and sense of humour. None come through very much. It is more of an aid for us to irk the French than his own usually superb take on them. Some put downs are missing such as already notorious retort of our man over there at a high French official trying to extol superb leadership of Napoleon over the rosbiffs: 'As all great leaders Napoleon understood the importance of luck and only selected 'lucky' candidates as his marshalls'. 'And how did it all end old boy?' - said our man.
En lire plus
2 personnes ont trouvé cela utile
Signaler un abus
Traduire les commentaires en Français
Afficher tous les commentaires